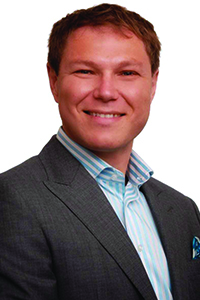 Leon is a familiar identity within Sydney’s Eastern Suburbs, recognised for his involvement in the community and valuable contributions to charitable organisations. Whether it be serving as a member for the North Bondi Surf Life Saving Club (SLSC), acting as an Ambassador for Arthritis NSW, earning his 4th Dan Black Belt in Karate or representing the community on Waverley Council, Leon is always determined to take things to the next level.

He moved to Australia with his family from Russia at the age of five and attended Bondi Beach and Rose Bay public schools, and then Emanuel and Vaucluse high schools. Leon has a diploma in Business Management and is also a graduating member of the Australian Institute of Company Directors.

As a passionate supporter of Cancer Council NSW, Leon recently participated at the Stars of the East event and won first place for the Judges Award. The event promotes a greater awareness of cancer in the Eastern Suburbs community and he collaboratively helped to raise over $160,000 for research to find a cure; and communicate a powerful message of love and hope to those effected by cancer.

A teacher of martial arts and self-defence, Leon has represented Australia at international karate tournaments, mentored dozens of dedicated young professionals and generated a host of innovative ideas that he introduced into the marketplace through the businesses that he both owns and operates. His previous tenure as Vice Chair of the Sydney Coastal Councils Group and the Chair of the Waverley Council’s Environmental Sustainability Advisory Committee has paved the way to a cleaner and healthier environment, whilst his stewardship of the Multicultural Advisory Committee has seen the community introduced to a series of projects which aim to promote both equality and multicultural harmony.

Leon wants to ensure all locals can be heard and to make the Waverley community a safer and more appealing place to live. He is committed to further enhancing the visual and sensory appeal of our neighbourhoods, particularly in regards to cleaner streets, infrastructure and community assets.