The changes to our natural habitat has allowed some introduced animal species into our urban environment. Some animals are considered pests because they compete with native species for food and habitat, including our domestic pets because they will eat small native lizards and birds, or at least disrupt the behaviour of the native critters in our streets, parks and reserves. 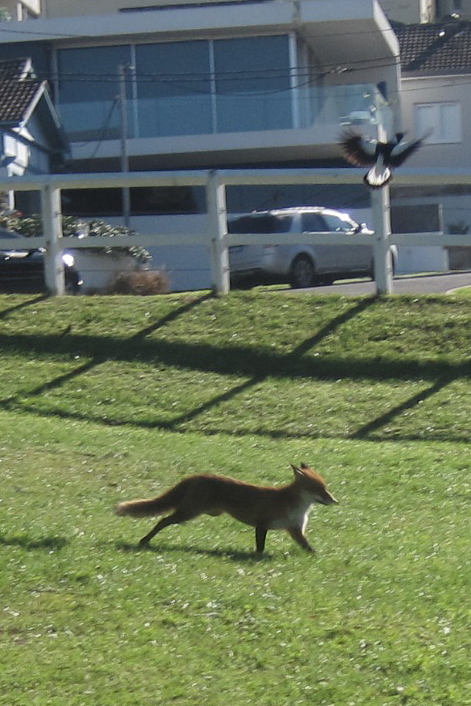 The European red fox (Vulpes vulpes) is a widespread non-native pest animal found throughout NSW and considered responsible for a range of negative impacts on the NSW economy, community and the environment. Since its introduction into Australia in the 1870s, the European red fox has contributed to severe declines and extinctions of a suite of native fauna, particularly among medium-sized ground-dwelling and semi-arboreal mammals, ground-nesting birds and freshwater turtles.

There are many foxes present in the Waverley Council area. In 2020 Council undertook a program of den fumigation and trapping in a number of locations in the LGA. This program reduced local fox numbers very slightly. Due to foxes being present across Waverley LGA, and throughout Sydney, and their intelligence to avoid trapping, eradication even in urban areas seems unlikely. You can find out more about urban foxes here.

To help to reduce the impacts of foxes, we encourage you to record and map sightings of foxes and fox impacts in your local area in FoxScan.  It only takes two minutes to record a sighting.

Many domestic cats and dogs were observed by the Australian Museum during the 2010 biodiversity Survey. Cats and dogs, both domestic and feral, pose a serious threat to our native animals. Native wildlife can be attacked by domestic pets that are allowed to roam free, especially at night. As a responsible pet owner, you can reduce the number of native animals killed in your area and maintain the health of your pet by following these simple guidelines:

The Common or Indian Myna Bird was introduced into Melbourne in 1862 to control insect pests in market gardens, and then to the sugar cane fields in north east Queensland in 1883. Indian Mynas have since become a very successful invader of both our natural and urban environments.

The Common Indian Myna is closely associated with human habitation. In the evening, large groups of Common Mynas gather in communal roosts, mainly in the non-breeding season, in roof voids, bridges, and large trees

Common Indian Mynas are accomplished scavengers, feeding on almost anything, including insects, fruits and vegetables, scraps, pets' food and even fledgling sparrows.

Why are they considered a pest?

Common Indian Mynas are considered pests in many parts of the world, and are one of 3 bird species that are on the top 100 of the world’s most invasive species. In Australia, these birds breed very successfully and hundreds of birds can gather at a single roost.

They compete aggressively with native birds and small mammals for food and nesting sites and can damage fruit trees.

In urban areas they can spread mites and have the potential to spread disease. They reduce the amenity of public areas through excessive noise and bird droppings.

What can you do about the problem?

There are many ways in which residents can help to keep the numbers of Indian Mynas down in our urban environment.