Changes to speed limits in Waverley

The project will be completed in stages. Stage 1 stretches from Bondi Road and Syd Einfeld Drive to the southern boundary of the LGA. However, Carrington Road, Council Street and Bondi Road are state roads so are not included in the proposed speed zone change.

After a community consultation stage, Council endorsed recommended treatments and line marking to proceed to detailed design and then approval for construction.

Construction works on traffic calming treatments will be carried in 2021 and 2022.

From February 2022, we will be installing the remaining 33 treatments across the Waverley (LGA).  Please access our maps to access treatment locations and line marking locations.

The broader project to change the speed limit is proudly funded by the NSW Government and will be coordinated with TfNSW once all treatments are installed.

Why is Waverley proposing going 40km?

In various community consultations, Waverley residents raised concerns around pedestrian safety and the overwhelming need for cars to travel slower in their neighbourhoods.

It also will help achieve ‘vision zero’, with zero fatalities and minimal serious injuries and reflects our People, Movement and Places (2017) policy which aims to make it easier for everyone to travel by improving the quality of streetscapes and public places.

The People, Movement and Places policy, endorsed by Council has 12 signature projects. #1 - Better Streetscapes included a short term action to - reduce road speeds throughout the LGA.

Which roads would be 40km?

The project has been broken up into stages. Stage 1 spans from Bondi Road and Syd Einfeld Drive to the southern boundary of the Local Government Area (LGA). However, Carrington Road, Council Street or Bondi Road are state roads so are not included in the proposed speed zone change.

When will this happen?

Depending on results and feedback from community awareness campaign review and Council's and Transport for NSW approval, indicative timeframes are:

Council do not enforce speed limits or earn any revenue from any NSW Police enforcement of the road rules. Waverley has a lot of High Pedestrian Activity, this change will be a massive benefit to pedestrians, cyclists and the broader community's safety.

What evidence do you have reducing speeds works?

I’m a good driver, why should I be punished?

Even good drivers make mistakes and many crashes involve two or more parties.

By slowing everyone down just a little, this may mean you are able to avoid a driver who isn’t paying attention to the road or a child that hasn’t looked before running out onto the streets.

There is no evidence of increased road rage incidents in areas designated by either 40 km/h or 50 km/h speed limits. Delays to drivers are generally caused at intersections, from congestion and from finding a car park. We always recommend to residents who are concerned with this to try the difference before the 40 km/h speed limit is brought in and see the change in driving time.

What are ‘traffic calming treatments’?

Which roads would not be included and why?

Bondi Rd, Carrington Rd and Council St are all State Government roads under review in other projects through Transport for NSW.

You say high pedestrian areas – where exactly are these?

These are areas of high pedestrian activity, near shopping strips, railway stations, bus interchanges, beach-sides and services such as medical centres.

What is the stopping distance at 50kmh and 40kmh?

What is an arterial road?

Will parking be affected?

Where we could, the proposed designs reduced parking loss. Throughout the entire project (38 traffic calming treatments), we anticipate only losing three spots on the corner of Queens Park Rd and Bourke Rd.

Can I have a say on this?

Visit Council's have your say page to comment on the specific treatment that may be on your street. For more information visit haveyoursay.waverley.nsw.gov.au.

This project received funding from the NSW Government.

View locations of Council’s capital works projects for 2020-2021, as well as timing of works and contact information 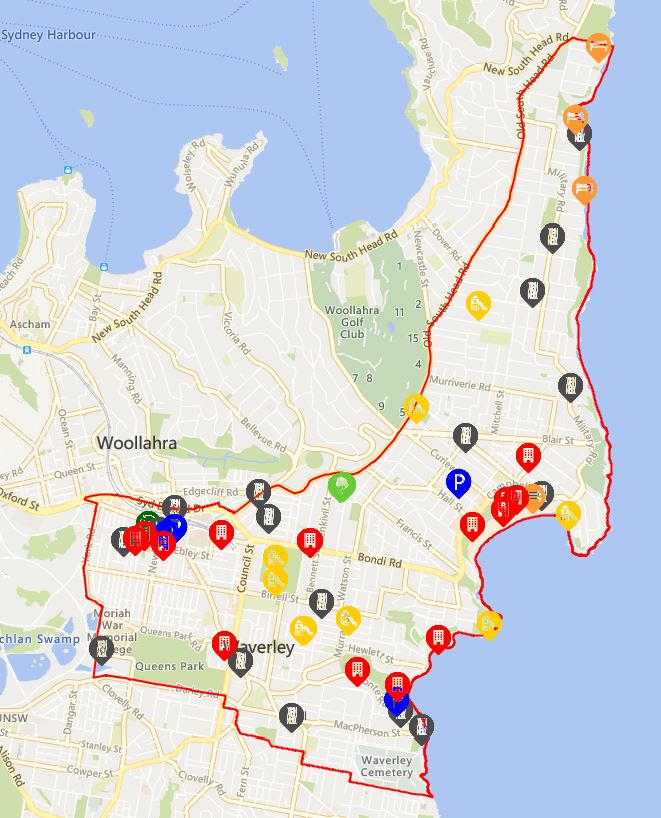