European exploration into the coastal region of eastern Sydney commenced in the early 19th century when the establishment of a military outpost at South Head and the completion of the first roadway to the South Head Lighthouse (1811) gave settlers their first cursory view of the coastal landscape of the new colony.

The opening up of the region soon saw the allocation of early land grants to prominent settlers in the locality.

Waverley Municipal Council, itself only proclaimed in 1859, soon recognised that a general cemetery was needed to service the developing community of the eastern suburbs and, in 1868, reserved 1200 pounds to purchase ten acres for the establishment of the cemetery.

Although the selected land remained on the periphery of the community, social attitudes towards death and burial had shifted by this time, away from those held during the early years of the colony. Society now desired picturesque, garden-like spaces where people could visit, remember and commemorate those who had passed.

Cemeteries were no longer to be dark and forbidding places, avoided out of fear and paranoia.

Following the purchase of a further 12 acres, Waverley Cemetery was formally opened on 1 August 1877 and its first interment (of Ruth Allen, 85 years), took place on the afternoon of 4 August 1877. From its first intimations, Waverley Cemetery was to be a grand metropolitan cemetery honouring the high moral standard and respect of the Victorian era and it would reflect the social prosperity of the Waverley community. 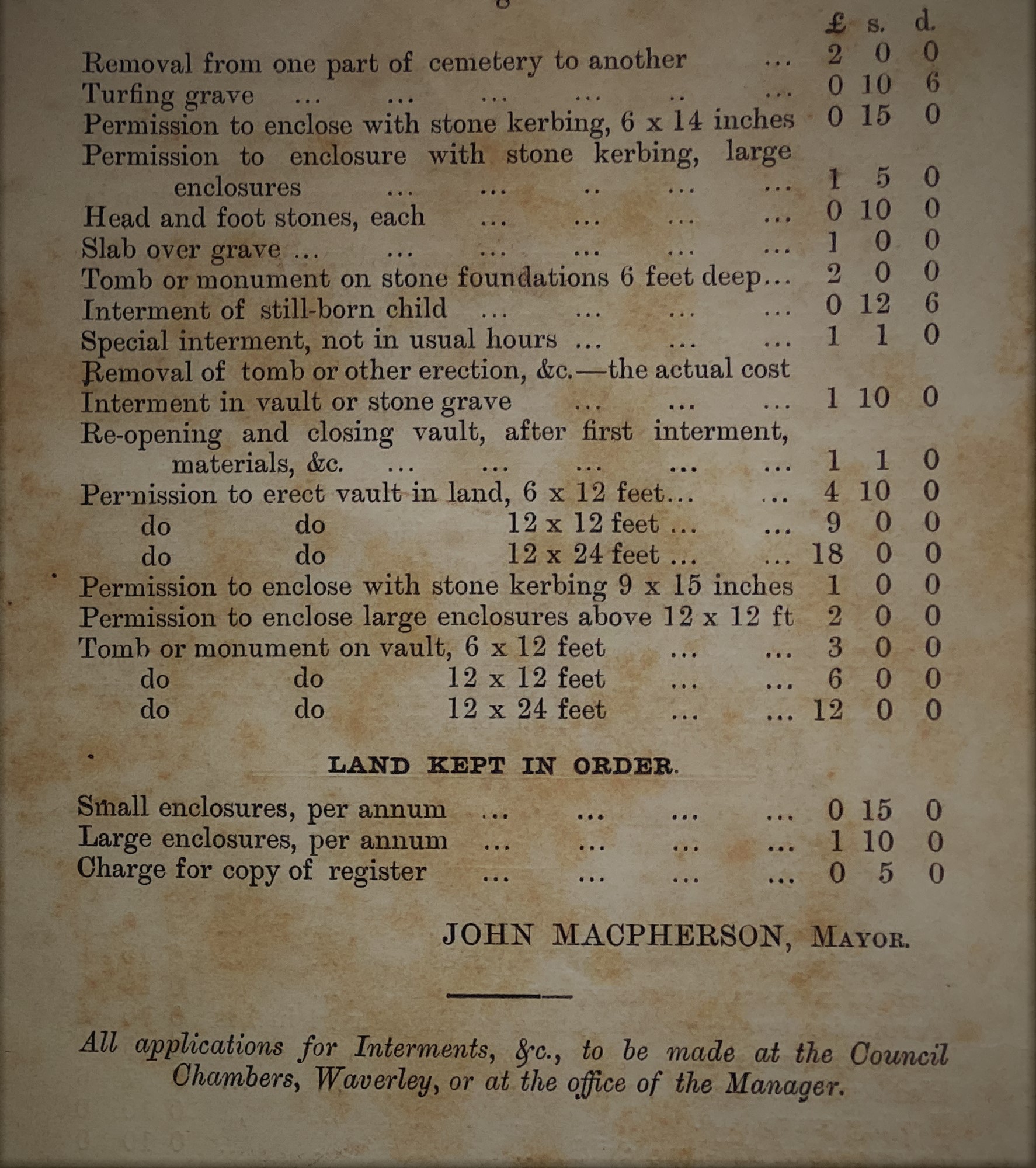 To manage the operation of the new facility, William Thomas was appointed as the first manager of Waverley Cemetery in 1877. Responsible for its day-to-day operation, Thomas conducted the development of the cemetery in accordance with a strict set of bylaws that governed its objectives with particular regard to style, layout and colours of headstones, grave sites and funerary furniture.

Laid out professionally as a cemetery of the Victorian style and with its recurring use of ethereally white Italian Carrara marble, Waverley Cemetery soon resembled a strategic collection of individual memorials that portrayed a cohesive and unified visual character.

Perhaps because of this visually pleasing effect when coupled with its dramatic natural setting, the cemetery proved to be highly popular with the community and its establishment costs were recovered entirely within the first year.

In the years following its establishment and with the extension of the steam tramway to the site in 1890, Waverley Cemetery expanded with the acquisition of a further 18 acres of land - bringing it to its current form of 40 acres (16 hectares).

The cemetery continued to expand throughout the 20th century, both in numbers and architectural diversity. The grand Victorian era of its establishment slowly morphed into the humbler Edwardian times which saw the introduction of cremation services to the cemetery.

Its ongoing use also saw the installation of a substantial collection of funerary monuments that ranged in fashion and style, reflecting the cultural diversity and social values of the people of NSW.