Here's some information about the project:

The pathway will provide equitable and dignified step-free continuous access around the entire perimeter of the coastal headline park and its facilities for people with a disability and their carers. It will also provide access benefits for other members of the community including people with limited mobility and families with young children in prams. 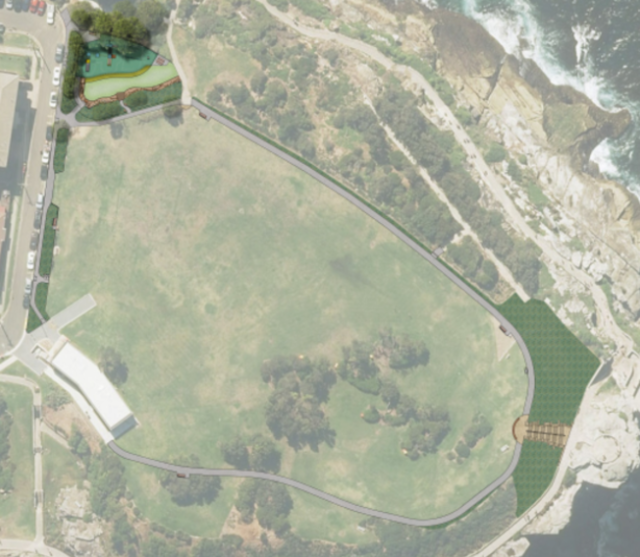 The path will occupy less than 5% grass of the upper park area thus retaining around 95% green space. This figure does not include any of the sloping embankment which is also part of the park. This is an accurate cartographic measure.  The proposed path does not occupy 10-12% of the park as cited in a petition form and in local media.

Residents were given the opportunity to provide feedback about the project during community consultation held in 24 February to 24 March 2017 and in again from 10 March 2018 to 8 April 2018 as part of consultation about the Marks Park playground.

The views expressed through the consultation favoured installation of the path in a manner that minimized visual impacts on the park. The design of the path sort to achieve a balance between providing accesses for all as well as minimising the impact on other uses of the park.

Stakeholders such as the Precinct Committee, Access Committee and Sculptures by the Sea were also consulted on the plans.

The community were primarily engaged through Council’s consultation and engagement website, Have Your Say Waverley. This site was updated on 24 February 2017 with key information on the project, which included draft plans, concept imagery, and a direct link to the online survey.

Letterbox flyers promoting the consultation and online survey were distributed to around 2500 local households within a 500-metre distance from the Tamarama to Bondi section of Coastal Walk.

The Have Your Say webpage received 281 visits, with 86 of those visitors downloading the concept plan. The online survey received 64 submissions in total. Key findings from the survey are detailed in the consultation summary report which is available online here.

Following the consultation period, an email was sent to respondents on 5 May 2017, thanking them for their contribution and to let them know of the next steps. Most recently, a notification of construction letter was issued in May 2019.

The park access and inclusion upgrades will meet Council’s obligations under the following legislation and support the following policies and plans:

The proposed new perimeter pathway achieves universal access by providing a pathway network into and through the park that links to park entrances, unique park features and facilities that benefits all users and creates a sense of convenience, safety and inclusion.

The pathway will benefit everyone including people with a disability and their carers as well as people with limited mobility and families with young children in prams. Council has also funded Sculpture by the Sea accessibility programmes via grant funding in previous years and is likely to continue to do so.

At the project outset in 2017, upgrade works to Marks Park were planned to be staged in two subsequent financial years as two projects, the projects being:

These respective plans were drafted and went to the community for consultation between February and April 2017. In 2018, the plans were developed with key stakeholders and budgeted accordingly. Through this process, the Landscape Upgrade project was delayed and consequently the project has taken longer than expected. As a result, both the Landscape and Playground upgrade projects are now being delivered simultaneously.

The tender for the project was approved by unanimous resolution of the Community and Operations Committee at its April 2019 meeting. Council subsequently entered into a binding contract for delivery of the works. In May 2019, a notification of construction letter was issued to residents.

The proposed pathway which circulates the park and provides access along Marks Lane costs approximately $100,000.

During the design process the location of the path considered:

A range of alternative options were explored, including those raised by Sculptures by the Sea. The final path design best meets the objectives of the principles mentioned above.

The path has been designed to meet Australian Standards and The Australian Human Rights Commission (2013) Advisory Note on Streetscapes, public outdoor areas, fixtures, fittings and furniture, Australian Standard AS1428 Standards for Access, AS2156 Walking Tracks,  and community and stakeholder feedback have informed the design and location of the pathway.

As such, the proposed pathway will be:

In the event of high winds or inclement weather, Council expects visitors to the park to make their own assessment if weather conditions are favourable enough to be outdoors. Likewise, if high winds were to occur during an event, the event operator would need to make an assessment if further management was required or if the event were to proceed.

Sculpture by the Sea

The playground and pathway works are due for completion in September in time for Sculpture by the Sea on 24 October to 10 November, 2019.

When designing the alignment of the path, close attention was paid to the worn areas of grass where event patrons walked in the previous year (i.e. the actual walking ‘desire lines’) so the path would be in areas where there had been no sculptures placed and that disruption to the event would be minimized.

Based on a study of Sculpture by the Sea events since 1999, sculptures are placed throughout the park and change from year to year, depending on the sculpture size, ground conditions and curation of the event. The event will need to remain flexible as it has done in previous years to accommodate the path, current and future users of the public space.