Waverley Council’s Chambers Refurbishment Project has progressed with Council last month voting to progress to detailed design following extensive consultation with the community and Councillors which resulted in changes to the initial concept.

Waverley Council is undertaking a major refurbishment of the Council Chambers building in Bondi Road to bring the building, built circa 1913, up to code and make it fit for the current and future needs of the Council and the community.

The building is at the end of its life, and over the years, has been subject to several costly ad-hoc alterations and additions that have resulted in major and costly layout, design, accessibility and compliance issues. It has experienced numerous problems including asbestos, significant water leaks causing major internal damage, failed air-conditioning, lack of accessibility and poor sustainability and insulation. 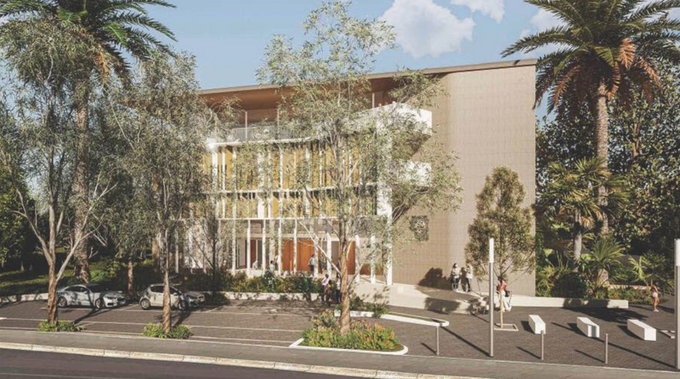 The concept design for the refurbishment which will be cheaper than constructing a new building while addressing numerous significant problems.

Five options were considered for the building (three options for building refurbishment and two options for a full knock-down and rebuild) and the most feasible and value for money option for ratepayers is a major refurbishment including the complete removal of the pre-1960s structure.

Mayor of Waverley, Paula Masselos said: “The bones of the building are good, and by not knocking it down, we’ll be retaining all that trapped carbon and will have a building that works better for staff and visitors and have greater street front appeal. It will also be cheaper than constructing a new building while addressing its numerous significant problems.”

“We have a strong vision for our public buildings and how we can make them more accessible and welcoming to our community, as well as facilitating modern, flexible working arrangements for our council staff. Additional customer service facilities offered at the refurbished chambers will supplement the Customer Service Centre in Spring Street, Bondi Junction.

“We also need to continue making wise investments during this period of COVID recovery and pouring money into a poorly designed building isn’t the way to go about it,” Mayor Masselos said.

In June, Council voted to:

1. approve the following changes to the concept design:

(a) The following customer service options should be accounted for in the next stage of the design:

(i) Justice of the Peace.

(iii) A duty planner with a booking system.

(b) The level 3 function space should be made available to book on evenings and weekends at reasonable rates. The bookable meeting rooms should include kitchenettes to make tea and coffee.

(c) All the meeting rooms should have audio-visual capabilities.

(d) Specialist traffic advice is to be obtained to consider the adequacy of proposed access arrangements from Bondi Road to the entrance of the building in terms of safe pedestrian access. Any recommendations from this advice should, where feasible and practicable, be incorporated into the detailed design of the works.

(e) The feasibility of rainwater reuse, as indicated in the draft Review of Environmental Factors (REF), is to be further explored and, where feasible and practicable, incorporated into the detailed design of the works.

(f) The feasibility and practicality of opportunities to incorporate additional sustainability elements into the design is to be assessed, including the increased capacity of a solar photovoltaic system, a Green Travel Plan and a Site Waste Recycling Management Plan.

(g) A landscape hard and soft plan for the immediate building surrounds to improve the internal and external links and street frontage presentation.

2. Proceeds to detailed design for the Council Chambers Refurbishment Project.

3. Notes that the General Manager, as the delegated authority, will assess the final REF report, Peer Review and Submissions Review to determine that Council Chambers Refurbishment can proceed.

“Council needs to progress the Chambers refurbishment project as a priority to avoid wasting ratepayer money on any further temporary fixes, which are becoming increasingly more expensive, and to make the building better suited for community use,” Mayor Masselos said.

“The building was fit for purpose in the beginning, but over the decades, has developed more and more problems due to random alterations, failure-prone services and band-aid fixes over the years.

“We also recognise that the way we interact with our community has changed, we are more engaged now with our community than we have ever been, and the goal is to create a sustainable civic asset where we can gather with the community and share ideas.”

The Council has budgeted $17.8 million for the project of which an estimated $12 million is needed just to make the building compliant. Plans for the refurbishment began several years ago and have been budgeted for in the long-term financial plan.

“In the past four years, Waverley Council has managed its budget very carefully and is in the enviable position of having $180 million in reserves. Our prudent fiscal management means we’re able to achieve the Chambers refurbishment within our long-term financial plan so we don’t need to take out a loan.”

Highlights of the concept design include:

The Chambers building currently accommodates office space and meeting rooms for staff from a range of areas across Councils and is the venue for Council meetings, citizenship ceremonies, advisory committee and public working group meetings and community forums and other events.