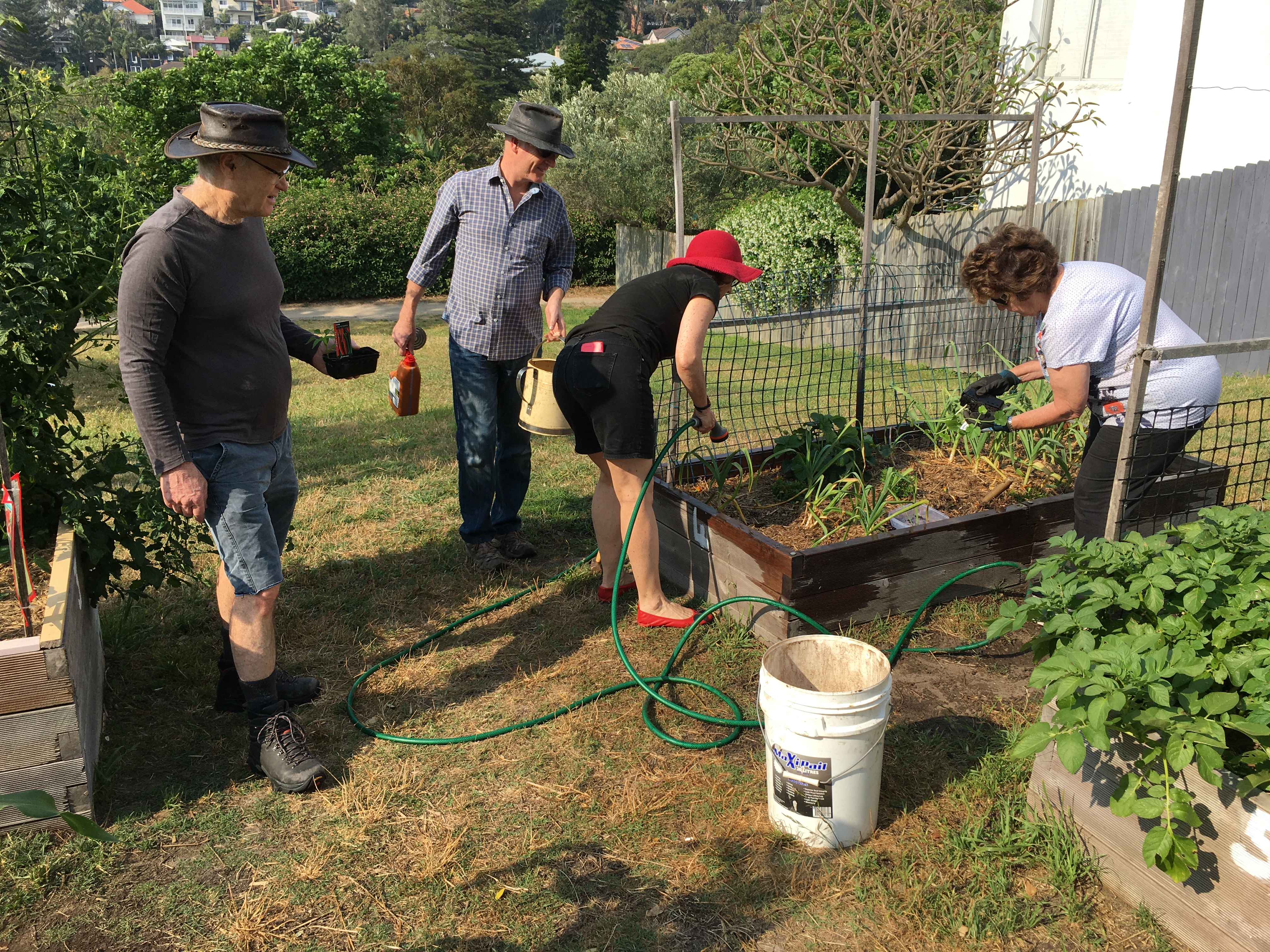 Waverley Council supports a range of shared garden groups in various locations across the LGA. A well maintained public garden can help reduce lawn mowing, provide habitat for birds and help to beautify the urban environment. This interactive map identifies where the gardens that Council currently support are located. To join one of our shared garden groups contact the Coordinator, Local Connections on 02 9083 8916 or email connected@waverley.nsw.gov.au 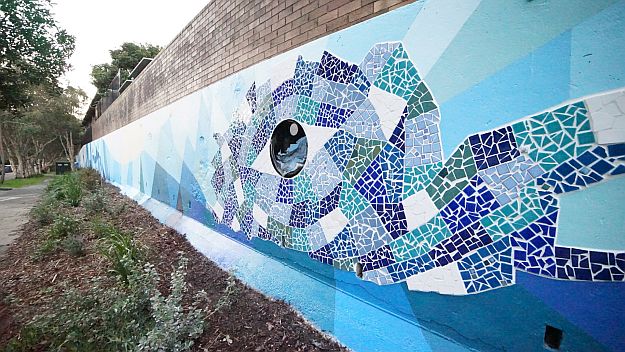 We look after a footpath verge approximately 150m long that backs onto Bronte Public School. The garden is challenged by sandy soils, a very steep embankment and school children looking for lost balls. Hence we planted hardy very local native vegetation. There is an awesome piece of street art on a retaining wall, about 80m by 3m, that provides a great backdrop for our garden.

Working Bee Schedule: Every 3 months and an end of year party. Typically scheduled in March, June, September and December. 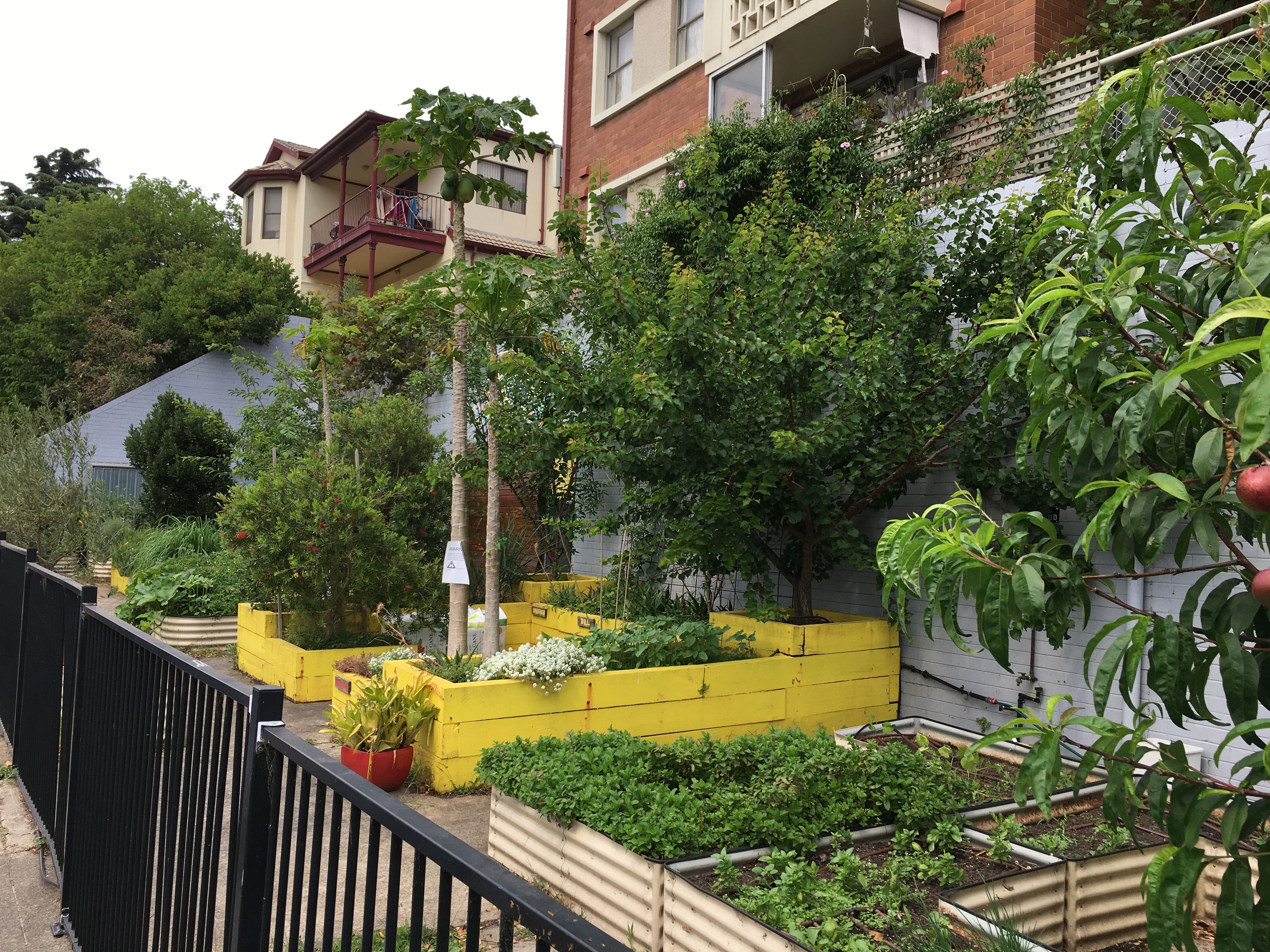 Our garden was established in 2013. It came about because some motivated residents requested the use of vacant Housing NSW land in Anglesea Street. Once permission was granted, we were very lucky to have the TV show ‘Better Homes & Gardens’ do a makeover on the garden. They fenced the area and build garden beds and planted fruit trees, olive trees and a variety of vegetables and herbs. The Anglesea Street Garden is run as a communal garden, so all the produce is shared. This is mostly successful. We’ve grown a variety of produce including pawpaws, rhubarb, garlic, turmeric, artichoke, sweet potatoes, blueberries, strawberries and radishes. We have a very successful composting program to which dozens of residents contribute their food and garden scraps. We have about 6 active gardeners however many people use the garden particularly for herbs and children play in the garden as it is fenced off from the street. Anyone is welcome to become involved.

Working Bee Schedule: Working bees are generally on the 1st Sunday of every month from 3pm to 5pm. However please always email before turning up. 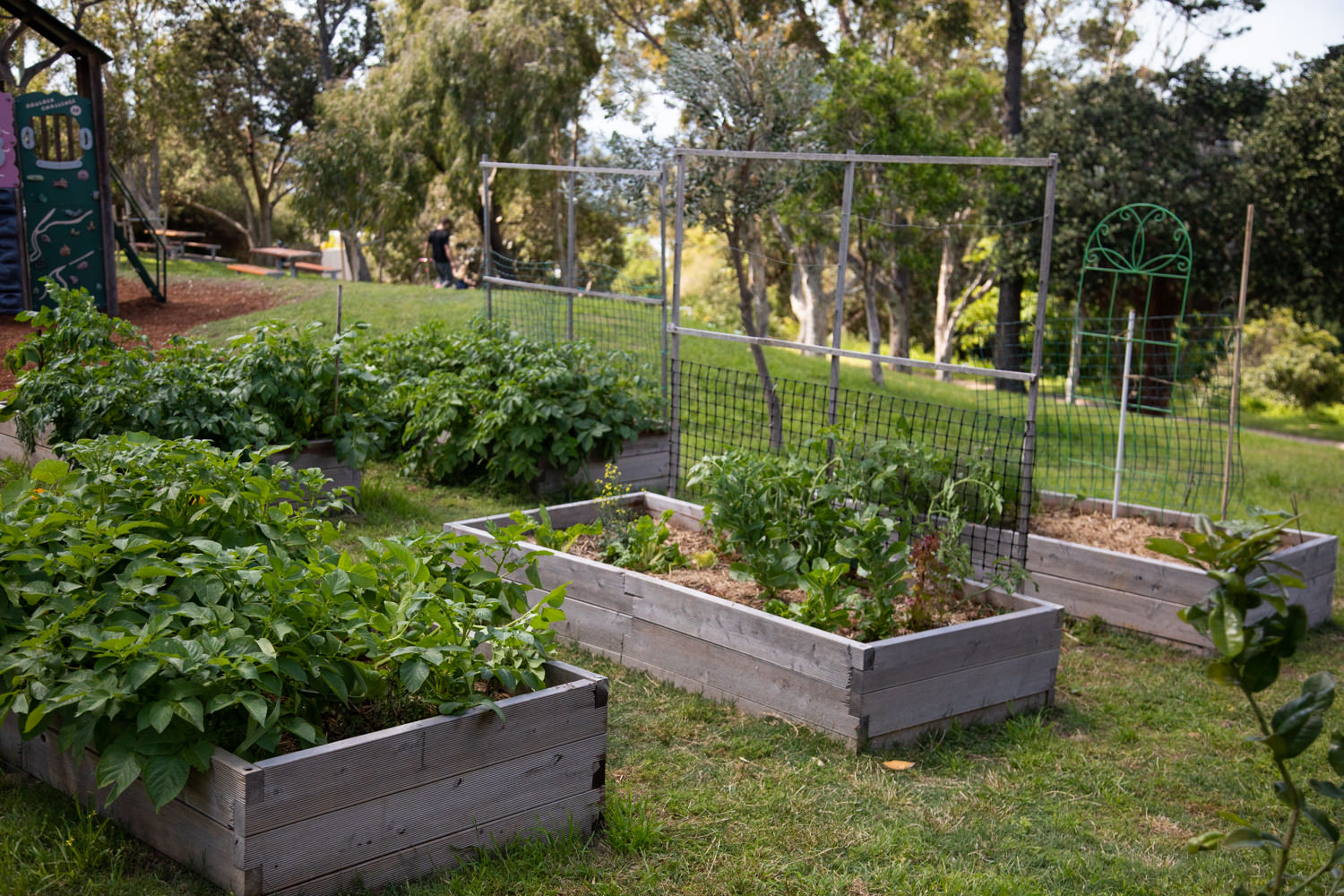 Our community garden was launched in August 2017 with great enthusiasm by a dedicated local team and a grant from Waverley Council. We operate by a roster system so that every three days someone is either watering, fertilising, using eco oil or just general maintenance. Currently there are ten active neighbours, seven of whom are the original members. 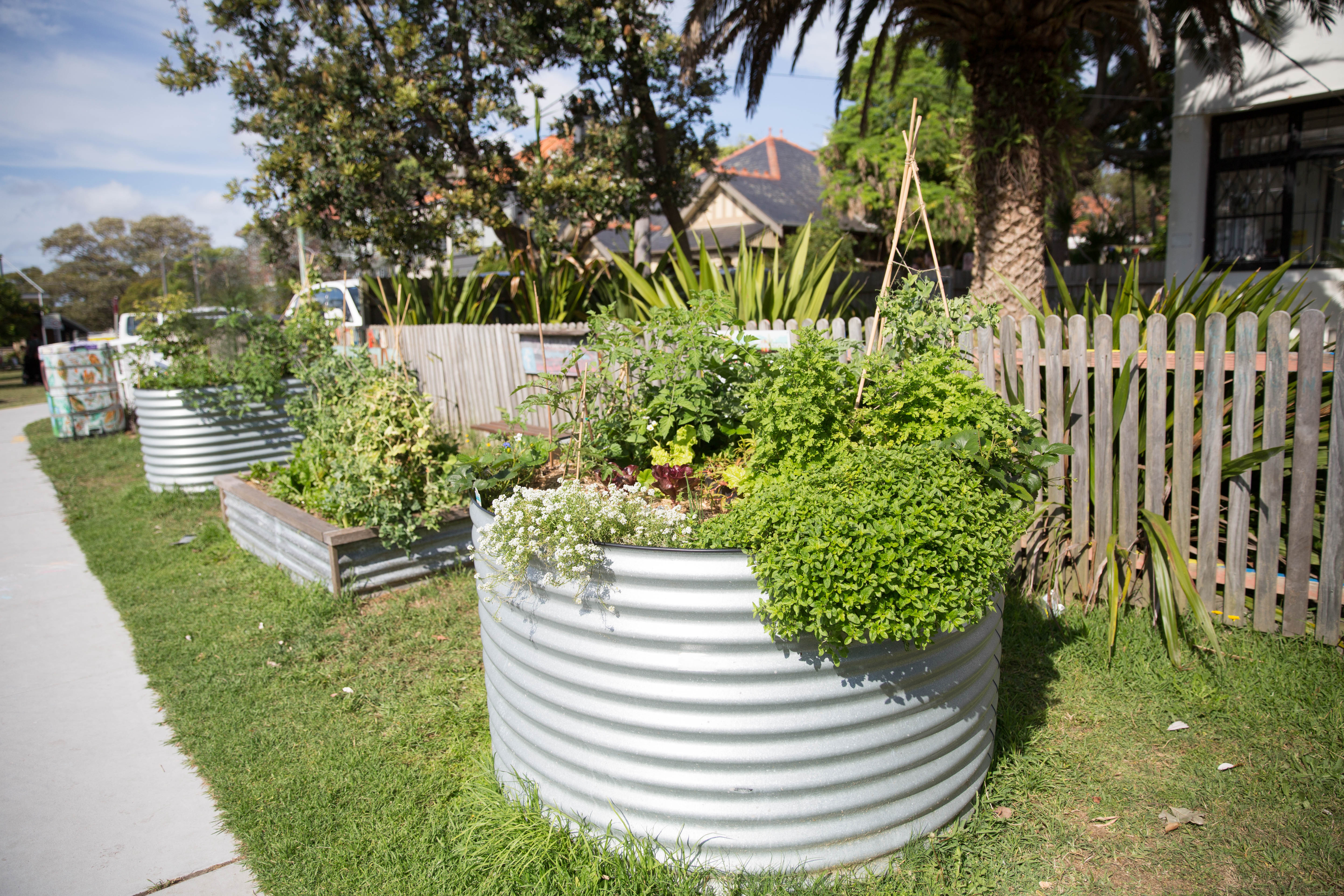 In May 2011, a keen group of neighbours launched the first Communal Garden in Waverley with the support of Waverley Council and advice from Costa of Gardening Australia. This group installed four raised garden beds and two low level beds, all with water conservation systems. The garden continued with changes of those involved until 2016 when the stalwarts moved out of the area. In late 2017, following a local letterbox drop by Council, a new group met, keen to be involved with the garden.  Over the following months people came and went but eventually a small but solid group was formed and began to experiment with the communal garden. In 2019 the group was successful in receiving a Council Small Grant which has been a great boost. We have participated in Grow it Local from 2018. The regular weekly Sunday morning meeting from around 8am to 9am have led to great friendships between the members and their assorted dogs. The location adjacent to the path and the netball courts means we do spend time chatting and receiving advice from passersby. There is a general plan but we enjoy ‘experimenting’ and being the surprise when we have success.

Working Bee Schedule: Every Sunday morning between about 8am to 9am. 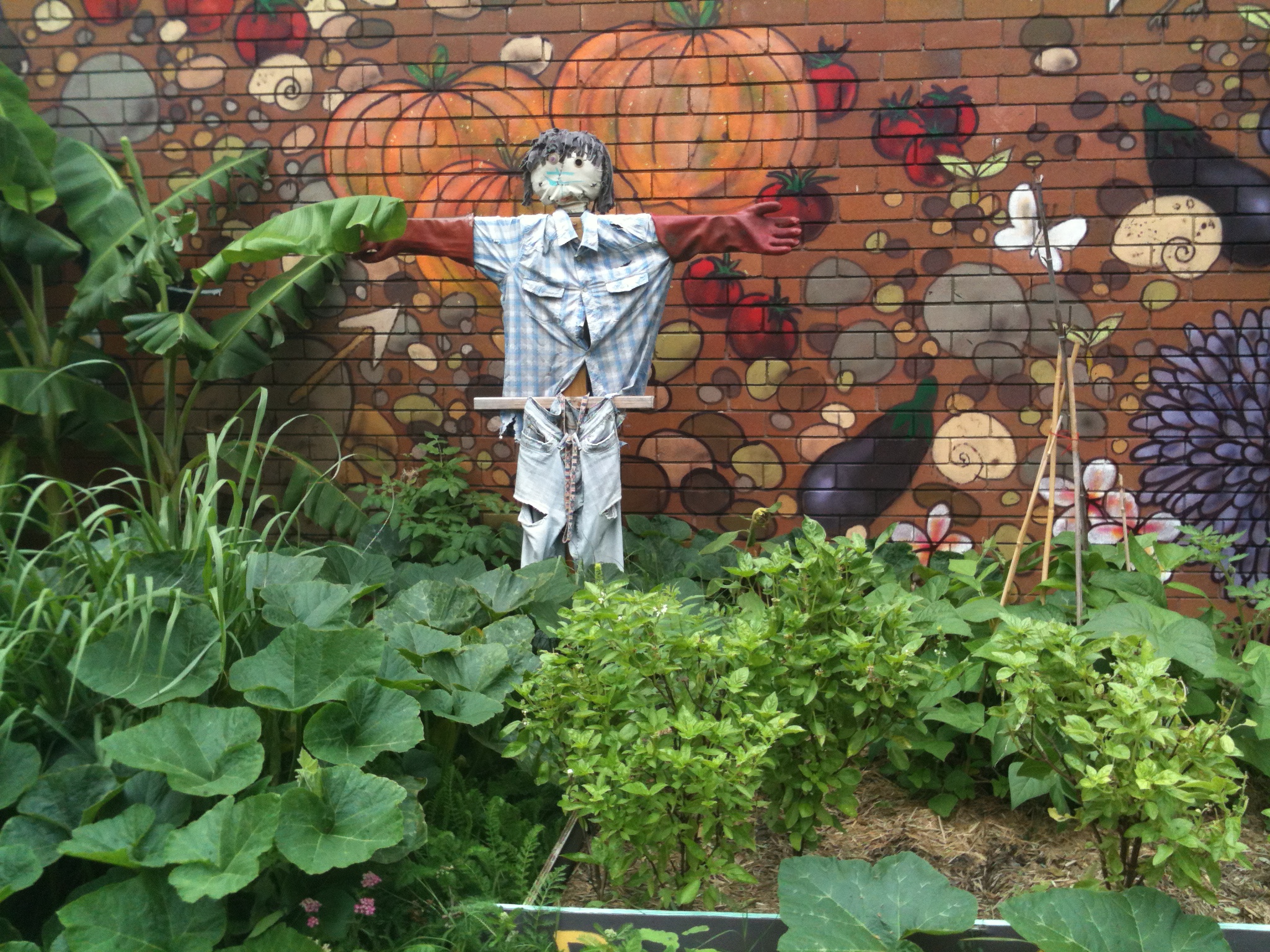 Langlee Lane runs behind Palmerston Avenue and joins Dickson Street, Palmerston Avenue and Carter Street. The first ramshackle beds were created way back in 2011, partly as a school social-awareness project, partly from an idea shared by a small group of neighbours. The bananas were amongst the first to be planted and about the same time Dickie the scarecrow was installed. Local artist Tom painted the gorgeous mural in 2012-ish. Several more upcycled beds were put in when the council gave us a tap in about 2013. We became far more official a year later when the council funded six proper raised beds – about 30 people turned up for that huge working bee.

We now have about nine veggie beds, a lot of bananas, papaya, three citrus trees, a lemon myrtle tree and are working to establish a native habitat for smaller birds. We won a native bee-hive three years ago after entering the Waverley Council Shared Garden awards. We have just split it for the first time and both halves seem to be doing well. We also have a very productive community food-scraps composting and worm farm corner.

The garden is used almost daily by a Waverley Council family daycare group as well as many neighbourhood families. We have been running the garden very informally on a get-there-when-you-can, everything shared and co-cared for basis. However, we are now working towards a more communal monthly working bee. We have had several great social gatherings over the years. We communicate via a Google group – details on the notice board - and welcome new members. 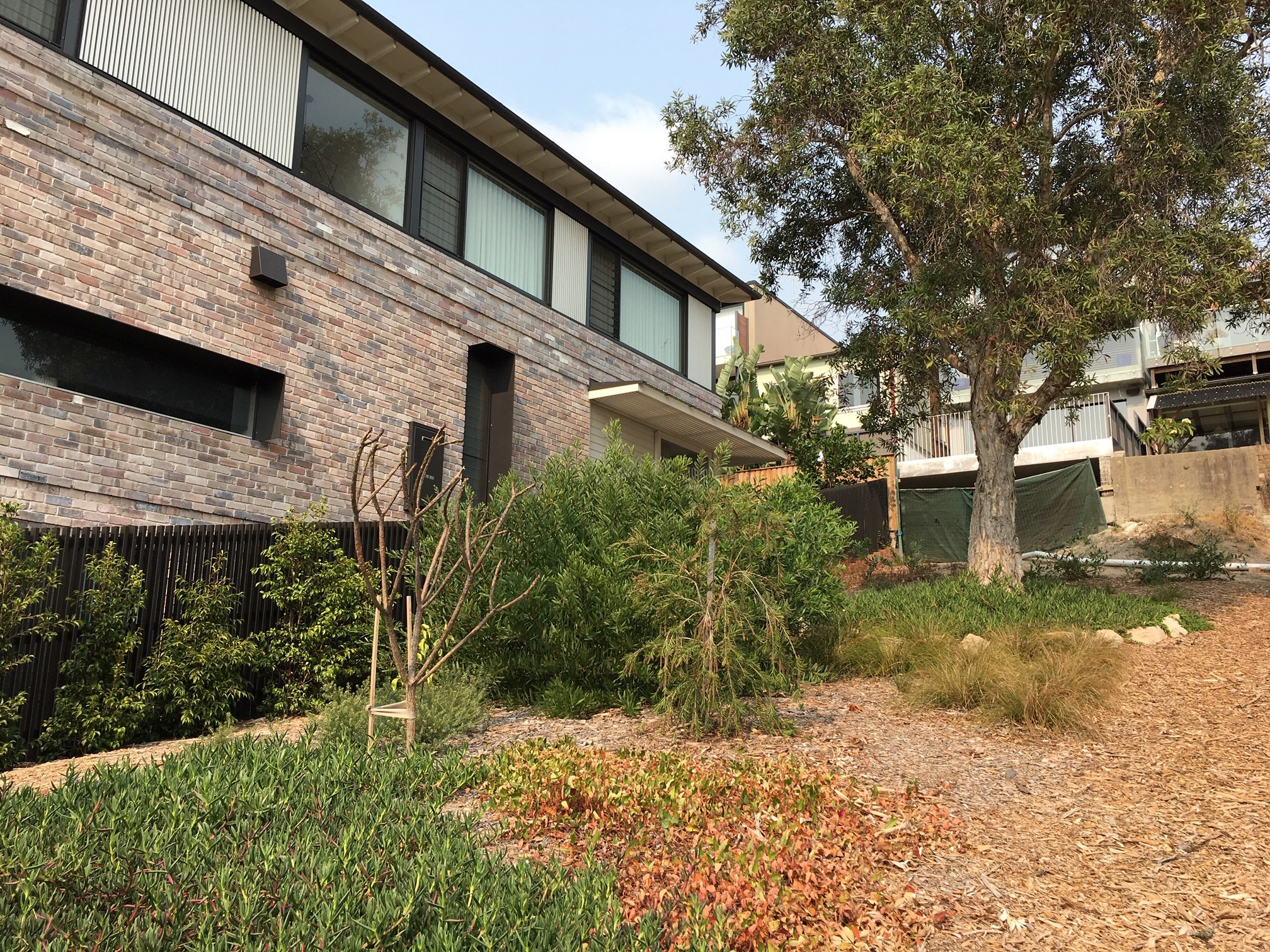 In 2018 a group of local residents living on or near Wilga Street in South Bondi started a collaborative project to improve the look and feel of the area as a response to the changes in the built environment and to create greater community connections. A verge native garden was created alongside the cul-de-sac encouraging neighbours to collaborate with planting, weeding, watering and maintenance. 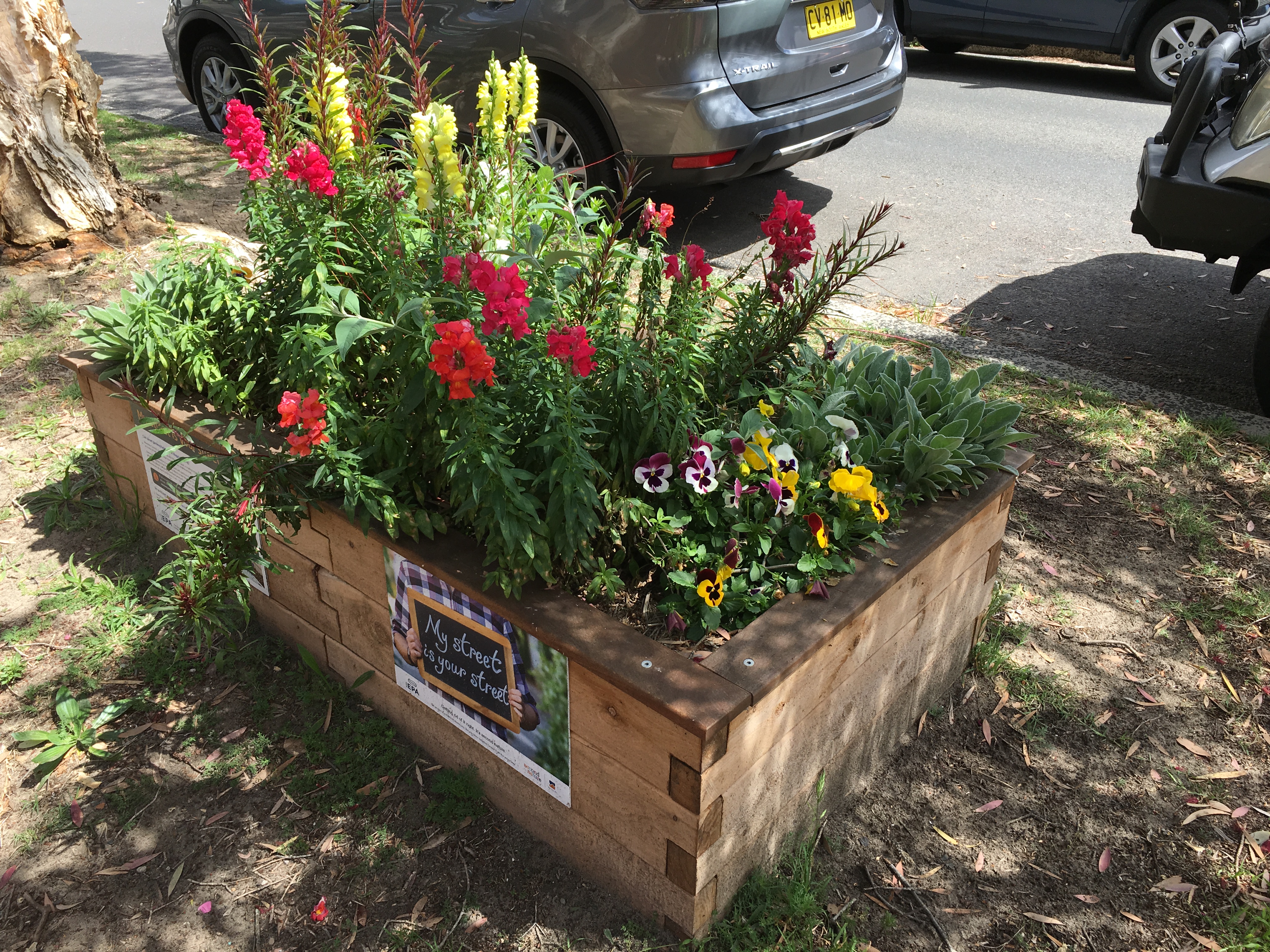 Waverley Council, in collaboration with Uniting Early Learning North Bondi and Wayside Chapel transformed the verge space on Niblick Street into a communal street garden. This is one of a range of solutions Council is testing to reduce illegal dumping in the area. To complete this project, Sustainable Waverley received a grant from the NSW EPA Waste Less, Recycle More initiative funded from the waste levy. This neighbourhood project is being driven by the enthusiasm of Jess Guerin, the Service Director of Uniting Early Learning North Bondi and the children who access this service. Regular working bees invite locals to care for and contribute to this garden, an indication of Bondi’s healthy community spirit to enhance public spaces and spread urban kindness in the LGA.

Shared Garden Team: Jess and a team of locals. 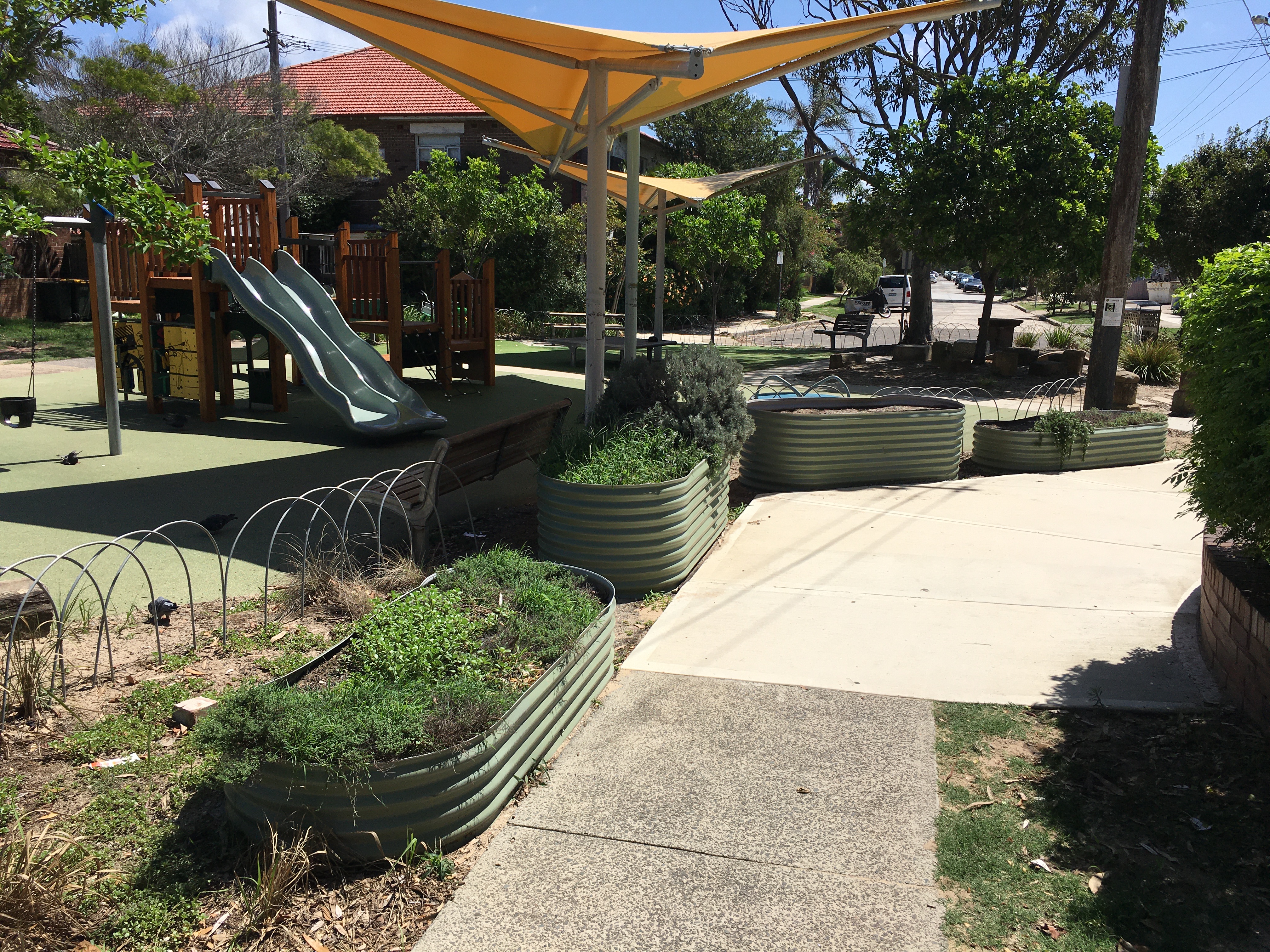 In 2007 locals showed great interest in improving the quality of the public space at O’Donnell Street Reserve. Starting with some simple planting of native shrubs, this progressed over the following years to the inclusion of new play equipment, shade structures, increased vegetation, resurfacing of the park, four planter boxes and seating. In 2020, a new group of local residents got together to bring these planter boxes back to life, much to the enthusiasm of passers-by who have expressed their enjoyment seeing herbs and vegetable sprout from the mulch as they wander past on their daily walks in the neighbourhood. The local Marli Marli Early Learning Centre is looking after one of the raised garden beds, dedicating it entirely to edible native plants.

Working Bee Schedule: Regular local gatherings at the site with those involved.

In 2014 a community-led placemaking project was developed for the green space next to Waverley Woollahra Art School. Included were recycled seating, planter boxes, a children’s activity area and space for temporary activations. In 2020 a local resident will be restoring four of the planter boxes to their former beauty with a host of herbs, flowers and seasonal vegetables while she completes her horticulture certification with TAFE.

Shared Garden Team: Vicy is managing this project. Get in touch if you are interested in joining her.

Working Bee Schedule: Vicy will be tending to the planter boxes every Monday afternoon. In 2013 Waverley Council installed planter boxes along the footpath at Charing Cross and not long after, a second series was installed at the McPherson Street shops at St Thomas Street. Local business owners continue to take care of these plants supported by eager urban gardeners in the local community. 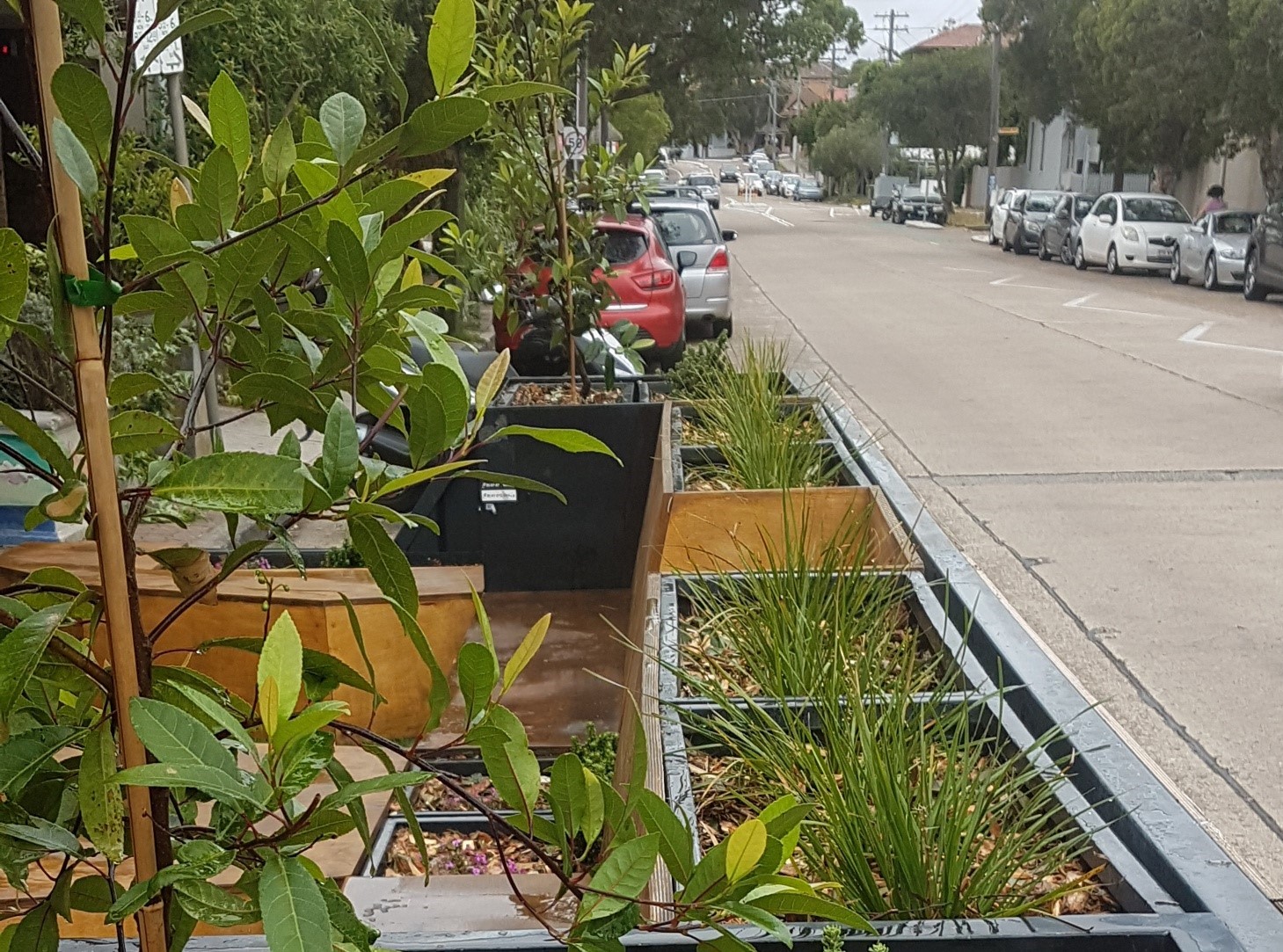 In 2018 two Parklet seating platforms were installed on Spring Street Bondi Junction encouraging members of the public to stop, rest and have a conversation, on this otherwise bustling street. Due to their success, two other Parklets were installed in the Waverley LGA currently located on Hall Street at Bondi Beach. The current upgrades on Spring Street have seen the Parklets move to Charing Cross and the McPherson Street shops at St Thomas Street. They are being looked after by local business owners and members of public interested in urban gardening and placemaking projects. These Parklet seating platforms are temporary structures that will continue to move to different locations around the LGA every six months. 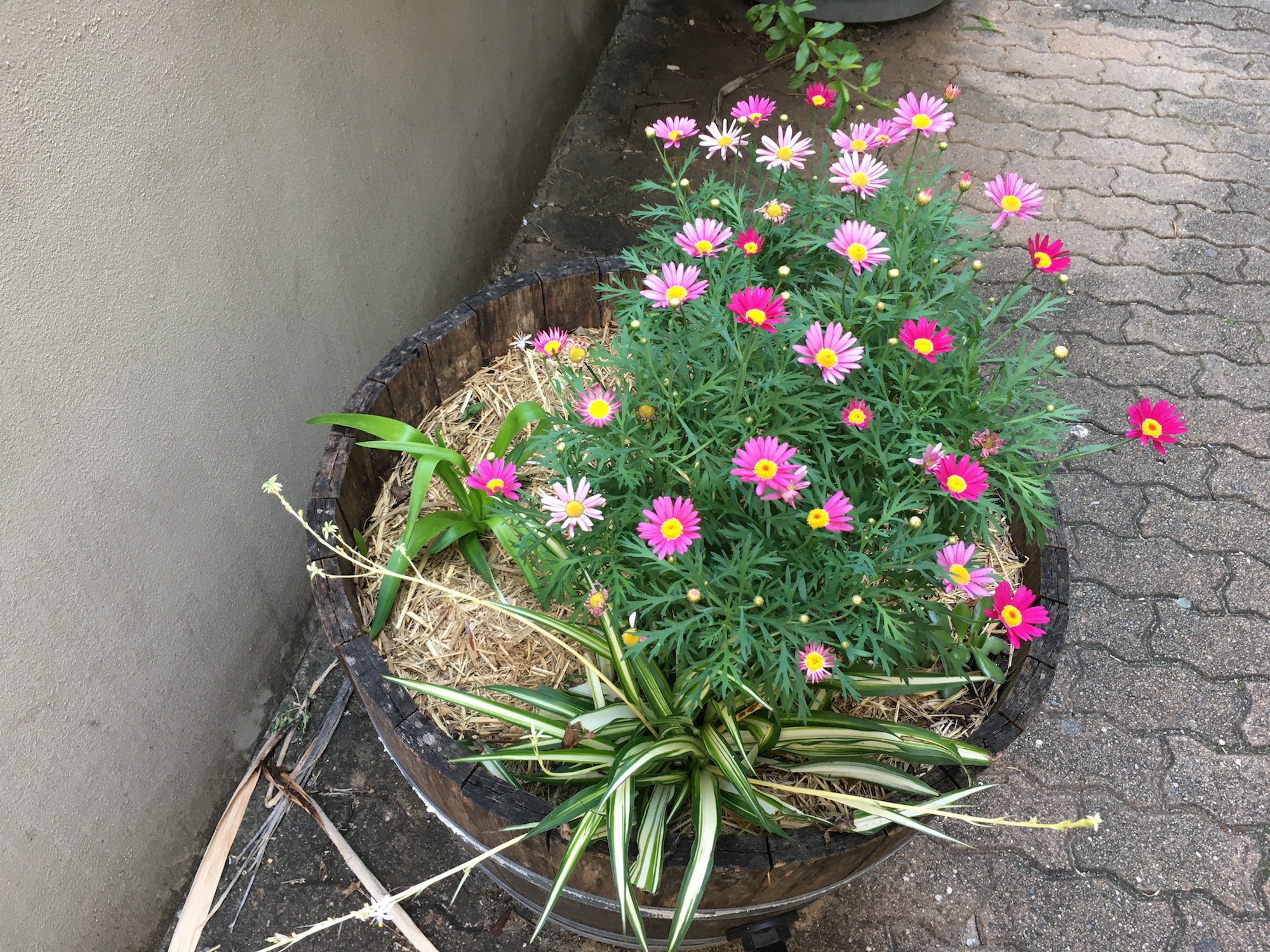 Charing Cross Laneway Shared Garden In 2018, a series of wine barrels were placed in Charing Cross laneway as a neighbourhood project to bring some life and warmth to this local public thoroughfare. Many different plantings have taken place in these wine barrels since, including a range of different flower displays and native plants.

Working Bee Schedule: Regular watering and maintenance by those involved. 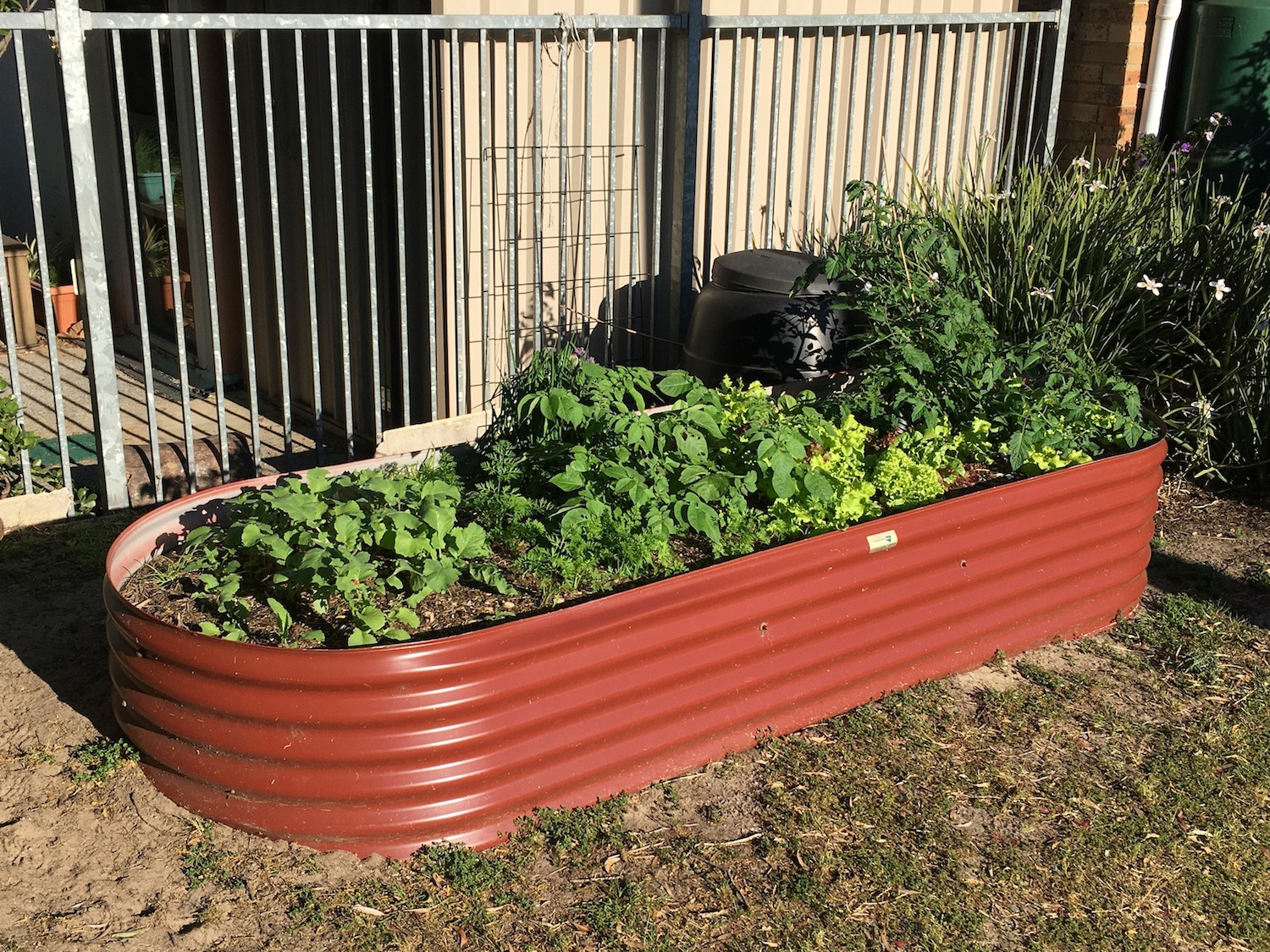 In 2017, a raised garden bed was installed outside Bronte Early Education Centre on St Thomas Street in Bronte.  A well-used Street Library also stands nearby for local community members to share books with one another while admiring the plants.

Shared Garden Team: Staff members from the Bronte Early Education Centre regularly tend to this garden along with a very dedicated grandparent.

Working Bee Schedule: Seasonal planting and gatherings with staff and parents are scheduled regularly throughout the year.