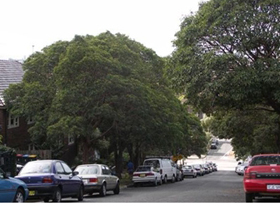 These areas are defined as the streets below the major ridge-lines and sheltered from the extremes of coastal or westerly winds. The soils are generally deeper than the adjacent elevated streets.

In Dover Heights and Vaucluse these are the streets on the western side sloping down to Rose Bay. In Bondi, the north facing slopes around Edward, Francis and Wellington Streets and in Bondi Junction the streets on the southern side of Birrell Street.

The streets in Dover Heights and Vaucluse generally have wide grassy footpaths with no overhead wires – ideal site conditions for establishing an avenue of low broad-domed trees.

In North Bondi and Queens Park the streets vary from wide to narrow often with low overhead wires.

*= may only be available from specialist native nurseries
Back to top