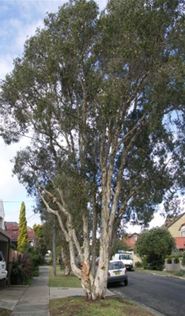 This zone extends north-west from the Bondi basin of Blair Street to the lower slopes of Rose Bay. The area’s original vegetation consisted of sand dunes and low lying swamps. It once supported stands of Eastern Suburbs Banksia Scrub – now listed as a threatened ecological community.

Some of the more significant tree species that were found here include: Wallum Banksia (Banksia aemula) and the Broad-leaved Paperbark (Melaleuca quinquenervia) in the flooded lagoon areas behind the sand hills.

The landscape of this area varies widely from established tree-lined streets such as Chaleyer Street, Murriverie Road and Onslow Avenue to sparsely planted streets such as Gilgandra Road and Niblick Street with wide bare naturestrips.  These open expanses can be explained by the recent loss of many mature plantings of New Zealand Christmas Bush (Metrosideros excelsa), a once dominant tree in this area. Generally the majority of streets have wide grassy naturestrips with only a few constrained by overhead wires.

A number of well established streets with plantings that date from the 1930’s and 1940’s, including:

*= may only be available from specialist native nurseries
Back to top