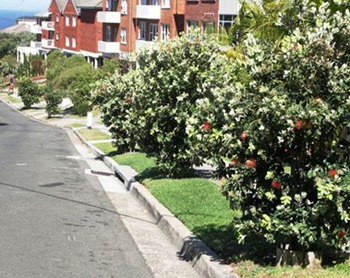 These areas are directly exposed to strong salt-laden winds. The original vegetation would have consisted of low, wind pruned heath plants. The soils are sandy and skeletal with little or no organic matter and are often only a thin layer over a bedrock of sandstone.

The areas range from the strip of cliff tops from Dover Heights and Vaucluse, down to the North Bondi headlands including Bondi Beach and headlands south to Clovelly. It also includes some streets directly exposed to southerly winds.

Choosing suitable trees for this zone is difficult and the species listed below are recognised as performing moderately well given the extreme conditions.

In Dover Heights and Vaucluse the coastal streets are generally wide with expansive grassy naturestrips. This is usually ideal for optimum growth of street trees; however, these wide streets are mostly exposed with little protection from direct salt laden winds. Harsh conditions and occasional poor tree selection have resulted in bare appearances in some streets.

The footpaths in the commercial zones around Bondi are mostly concreted and require specific species selection and robust protection in the form of solid tree guards.

*= may only be available from specialist native nurseries