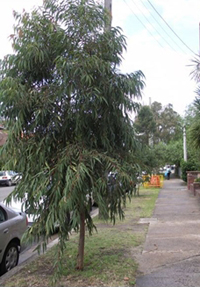 The exposed ridgetops are the dominant ridge-lines of Charing Cross, Bondi Junction, and Bondi with their exposure to southerly and westerly winds and Dover Heights where the ridgetops experience strong salt laden coastal winds.

The areas of shallow soils over a bedrock of sandstone are found throughout Bondi Junction and the streets of Dover Heights, Waverley and Bronte. The original vegetation of these areas consisted of low heath plants growing on sandstone.

Both areas have minimal or restricted soil depth for root growth.

The streets are extremely varied from the wide grassy nature strips in Dover Heights and parts of Bronte to the concrete or asphalt footpaths in the streets around the commercial zones of Bondi Junction and Charing Cross.

*= may only be available from specialist native nurseries