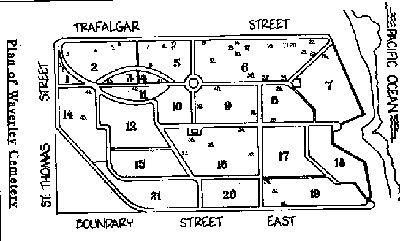 Opened in 1877, Waverley Cemetery covers an area of approximately 41 acres. The Waverley Municipal Council is the cemetery Trustee.

Some of the notable persons buried in Waverley Cemetery are listed hereunder and the locations of the graves are shown by corresponding numbers on the map of the cemetery at the end of this page:

6b. JAMES RICHARD HILL (1836-1898) banker and financier. Worked his way up in the Bank of N.S.W. from junior clerk to President. Chairman of A.M.P. Society, Director of Tooth's Brewery and Sydney Hospital.