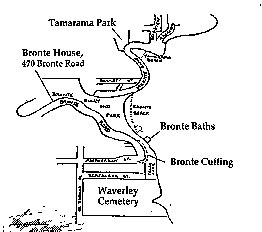 Bronte and Tamarama, popular for surfing and picnics, are part of the beach culture of Waverley, with marine life and vegetation being just as important to the area's heritage as is historic Bronte House.

Tamarama Beach can be approached on foot along the scenic coastal walk from Bondi Beach or a stroll down Dellview Street. Tamarama is a small intimate beach and park in an enclosed valley, with plantings of Coastal Banksia and Mirror Bush. At the rear of Tamarama Park is Fletcher's Glen, named after an early owner David Fletcher, Waverley's first Mayor.

In his time the glen was famous for its beauty and layout. A waterfall awaits your discovery. Bondi Aquarium amusement park opened at Tamarama in 1887 and lasted until 1906.

During its heyday it was one of the principal pleasure resorts of Sydney, featuring an open-air roller skating rink, amusement booths and aquarium tanks of fish, turtles, sharks and performing seals. Vaudeville acts and concerts were an important part of the entertainment.

The site was revived as Wonderland City in 1906 and operated until 1911. The switchback railway was moved from its Aquarium site above the beach to the rear of Tamarama Park and additional attractions were built, including an airship suspended upon a wire which ran above the beach from one side of the bay to the other. The children's favourite was an elephant appropriately named Alice. The Tamarama Surf Lifesavers Club commenced in 1906-7 and, in conjunction with Wonderland City, held gymkhanas on the beach, a prelude to surf carnivals.

The pretty setting of Tamarama Beach is an attraction in itself, but the lifesavers know it can be a dangerous surf. Walk along Marine Drive, a work project of the 1930's Great Depression, to Bronte Beach and enjoy the ocean views. Bronte has a fine small scale, sandy beach, enclosed by sandstone headlands.

It is on Nelson Bay, named for Admiral Lord Horatio Nelson, who was given the title of Duke of Bronte by the King of Sicily Bronte Surf Life Saving Club claims to be the oldest in the world, commencing in 1903. Life saving techniques were taught to locals by Major John Bond who is also credited with designing the surf lifesaving reel.

The first surf boat, "Albatross", made its appearance at Bronte. Bronte Park, sometimes called "Bronte the Beautiful", is set in a sheltered valley behind the beach and is ideal for family picnics. It was proclaimed a public recreation reserve in 1886. The park retains much of its 1920-40 period layout and character, including the pathways, picnic huts, children's train, Norfolk Island Pines and Canary Island Palms.

Behind the park lies Bronte Gully, once the extensive garden of the Bronte House Estate. There is a charming walk amongst the trees beside what was once a natural creek, this leads you to a waterfall, particularly picturesque after rain. Take time to enjoy the vegetation and listen to the numerous song birds. Bronte House, 470 Bronte Road, was designed by the Colonial Architect, Mortimer William Lewis, who laid the foundations.

The property was purchased by Robert Lowe, M.L.C. a Barrister. He completed the house in 1845 to Lewis' design and lived there for five years before returning to England where he became Lord Sherbrooke and Chancellor of the Exchequer. Bronte House is the oldest house in the Waverley Council area and one of the finest. A magnificent, mid-Victorian mansion, its "fortress-like" round towers were constructed for protection in an era of convicts and bushrangers.

Mrs. Georgina Lowe, a skilled watercolour artist, botanist and gardener, was responsible for landscaping the grounds with native and exotic plants and designing picturesque walks. Today, Bronte House is owned by Waverley Council and is opened to the public on special occasions. Bronte Baths was built in 1887 and the Bond family were its lessees for many years.

The bogey holes ("Bogey" is an aboriginal word meaning "to bathe") form protected areas for swimming and a reef where marine life adds an important element to the Bronte scene. Protection of this marine life is a matter of concern. Enjoy an excursion amongst the rocks at low tide, but please do not interfere or cause any damage. The tram route to Bronte Beach was opened in 1911. Because of the steep gradient of Bronte Road, a tram route was cut into the sandstone rocks above Bronte Baths. This is a rare reminder of Sydney's trams which were particularly important in providing access to the eastern beaches. An additional reminder is the period waiting shed at the terminus. The last trams ran to Bronte Beach in February 1960.

Bus No. 379 now serves Bronte. Walk via the old tram cut to Calga Reserve which has a natural sandstone rock shelving and a vantage point for extensive views out to sea. Vestiges of native vegetation in rock crevices include Coast Rosemary, Matt Rush, Coast Ti Tree and Coastal Wattle. Waverley Cemetery retains its Victorian and Edwardian character and attitudes to life and death.