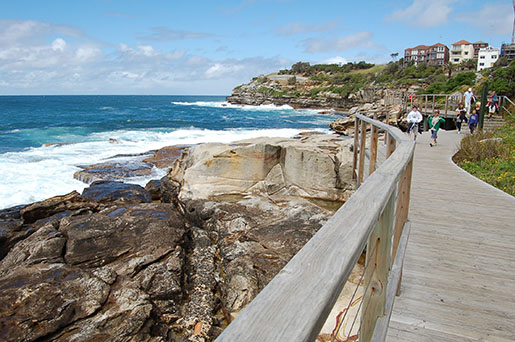 Its combination of beaches, parks and spectacular views make this walk unique. It started out as a state project during the 1930s, it now extends from Ben Buckler Point to the southern end of Waverley Cemetery (and on to Coogee; for information call Randwick Council). It includes Bondi, Tamarama and Bronte beaches and a medium gradient cliff-top path from Bondi to Tamarama, with occasional seating and several staircases. The beachside parks offer picnic shelters, coin-operated barbecues, play areas, kiosks, toilets and change-rooms.

Although the parks along the way offer shade and shelter, the Walk itself is exposed to the elements. In summer, don’t forget your hat, sunscreen and some water.

The promenades, parks and beaches at Bondi and Bronte are fully accessible for wheelchairs and prams. A lookout in Calga Reserve (north of Waverley Cemetery) is also accessible from the Bronte Cutting. Please note several sections of the coastal walk contain stairs and steep hills. The stair locations are marked on the map.

Riding a bike is a great way to get to the beach. Bike racks are available at most beach locations. Dockless share bikes are a flexible way to supplement your trip as you can ride the bike for part of your trip. Waverley’s cycling map can help you find a safe and easy path to your destination.

From Bondi Junction interchange, you can catch buses 333, 380, 381, 382 (to Bondi) and 379 (to Bondi or Bronte). Over the summer weekends and public holidays between October & April, there is also the 362 (to Bondi, Tamarama, Coogee).  Our public transport page contains alternative travel options including accessible and On Demand services. For more information on buses including the Sydney Eastern Suburbs bus map, see transportnsw.info.

There is limited paid parking at Bondi (Park Drive and Queen Elizabeth Drive) and Bronte (Bronte Cutting Car Park) We encourage people to use other forms of transport than driving – why not catch a bus, walk or ride a bike? It’s often quicker, cheaper and more convenient.

Council lifeguards are on duty all year at Bondi and from September through April at Tamarama and Bronte. To check beach conditions or lifeguard duty times call 9083 8888. Always swim between the red-and-yellow flags!

Some of the few remaining local areas of native bush are found here. Regeneration is being done by volunteers under Waverley Council guidance. For information call (02) 9083 8915, email us or visit our Bushcare pages.

Dogs may enter the Coast Walk on a lead only. They may not enter the parks, beaches or cemetery, and may use the beach promenades only after 6pm in winter and 8pm in summer. Bags are available at points along the walk; please use them!

The area once consisted of ‘long sweeps of beach and nothing behind but gums and stunted brush, with a stream meandering through fern gullies and palm groves to a blue lagoon just behind the sand.’ Land subdivision in 1852 attracted few buyers. The beach itself became highly popular, however, and a public reserve was created in 1882. ‘Sea bathing’ remained illegal until 1902, and in the 1960s Council officers armed with tape measures were still ordering women to leave the beach if their bikini sides measured under 4 inches.

Surf Life Saving Clubs were established at Bondi (officially the oldest in Australia), Bronte, North Bondi and Tamarama in the first decade of the 20th century. The Bondi club first used the ‘reel’, and the ‘torpedo’ float was invented at Bronte.

The original 1911 bathing pavilion was replaced by the existing structure in 1928, complete with Turkish baths. As demand for such facilities declined Waverley Council converted some of the space to a Community Centre providing cultural activities such as plays, concerts and workshops. For information call 9083 8400 or visit the Pavilion website.

The baths were built by Waverley Council in the late 1880s and became home to the Icebergs Club, which now manages them, in 1929. The Club’s season begins in early winter, when a tonne of ice is deposited in the pool. Non-members are welcome on a paid-entry basis. For information visit the Bondi Icebergs website.

In 1887 the valley of Fletcher’s Glen became home to the Royal Aquarium and Pleasure Grounds, with exhibits including sharks, seals and one penguin, as well as roller coasters, sword contests, tightrope walkers and roller skating rinks ‘illuminated by the electric light’. In 1906 this became Wonderland City, featuring a miniature railway along the clifftops and an ‘airship’ suspended above the beach. Wonderland closed in 1911 and in 1920 the land became Tamarama Park.

With its freshwater creek, wooded gully and abundant sealife this must once have been a little paradise, and some of that feeling survives. The area was subdivided into building lots in 1884, and the Park created in 1887. It is named not for the famous writers, but, like the adjacent bay, for Admiral Lord Nelson, who was also the Duke of Bronte.

The Baths were built by Waverley Council in 1887 to cater to the new ‘sea bathing’ fad, with Sundays and public holidays reserved for men. The rules have changed but the original structure remains largely intact.

Aboriginals rock carvings of a shark and whale can be found next to the path south of Mackenzies Point (whales migrate regularly along this coast). Other carvings can be found at Ray O’Keefe Reserve and Williams Park (Bondi Beach Golf Course) at North Bondi.

One of the world’s more scenic operational cemeteries. The first interment took place in 1877, and graves of famous Australians such as Henry Lawson can be found here. For information on tours or gravesites call (02) 9083 8899, email cemetery@waverley.nsw.gov.au