In late 2016/early 2017, forty two solar compactor bins were deployed at litter hotspots areas in Bondi. These 'smart' bins use solar power to squash waste and recycling, allowing them to hold up to five times the amount of waste as a normal bin, which is necessary to accommodate our 80,000 visitors that pass through Bondi daily over summer (according to Opal data). The installation of these solar bins is part of Waverley Council's Sustainable Waste Strategy which aims to reduce our waste, increase recycling and reduce litter on our beaches and streets. Council won the Internet of Things award 2017, which is a national award recognising our innovative tech-bins that are connected in real time to the internet providing Council with up to the minute information on the status of the bins. Council also received the Highly Commended Smart City Awards 2017 for Best Local Government Initiative.

What are solar bins?

Solar compactor bins are a new wave of ‘smart’ technology in a rubbish or recycling bin. They use solar power to compact the waste within them, and they use Wi-Fi to communicate when the bin is full and ready for collection. 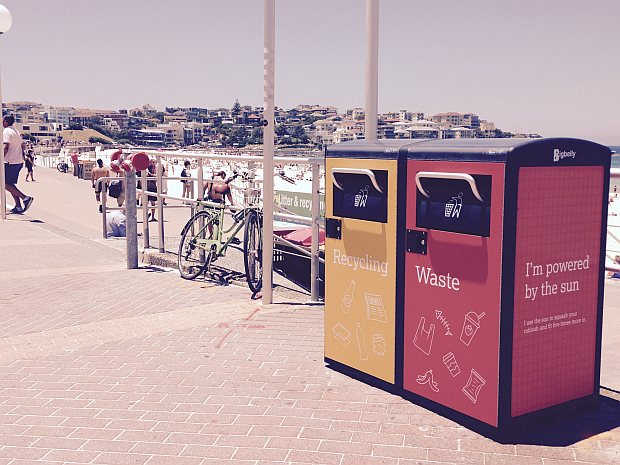 Solar bins are part of our strategy to tackle litter and keep Bondi beautiful, particularly in summer when there is an influx of visitors through Bondi Junction transport hubs and at Bondi Beach.

Solar bins also create better amenities for the community with the following features:

The forty-two individual solar bins have been deployed in the Waverley area. The bins have been stationed in stations of two – one bin for recycling,and the other for general waste. The dual stations have been positioned at 11 locations at Bondi Beach and 10 locations at Bondi Junction. It follows great examples in other notable smart cities worldwide, including Barcelona, Amsterdam and New York. Other national Councils with solar bins include Parramatta, Melbourne and Canada Bay.

Why the bright design?

We wanted to keep consistent with household bins for recycling (yellow) and general rubbish (red). We also asked the general public for their opinion on various bins design options. An overwhelming majority preferred bright designs so that they could be easily spotted. People thought this would reduce littering and therefore result in more people using the bins. We’ve also drawn from research on best-practice examples overseas.

What else are we doing?

As part of this project, we’ll also be strategically installing cigarette butt bins at hot spot locations. The cigarette butts collected will be recycled into park benches and other plastic infrastructure by Terracycle.

Litter prevention signage will be placed in hot spot sites, Council Rangers will actively engage with community members about littering and we're also engaging local businesses to help reduce takeaway litter as part of our Bondi Unwrapped campaign which was partially funded by the NSW Environment Protection Authority.

How can you help?

We’d love for you to continue your great work in spreading the message about doing the right thing with rubbish and recycling. We hope it becomes second nature in our local area and beyond.

What are the benefits of solar bins?

Bondi can receive up to 50,000 visitors per day in the summer, which can often result in excess waste, overflowing bins, and litter on the ground. Therefore, we need more bin capacity to cope. Our new solar compactor bins use the suns energy to squash the waste and recycling. As a result, it provides us with five times the capacity of a regular bin. The bins also have a bright, sleek and clean design to ensure locals and visitors can see the bins and are encouraged to use them.

What is happening with the old bins that are being removed?

The bins that are being taken out will be relocated in other places across the area if they are still in good shape. Those that are not will be recycled.

Why are solar bins not being placed all over Waverley?

These solar compactor bins will be positioned in high-density areas with numerous visitors. The initial roll out of the bins has been supported by the NSW Environment Protection Authority.

Once the benefits of these solar bins have been fully assessed and analysed, we hope to progressively roll out more bins in optimum positions in Waverley in the future.

How will I know how to use the solar bin?

The solar bins have life size icons on the front panel that illustrate the types of items that go in each bin. The imagery utilised on the bins is meant to cater to the vast amount of international visitors we receive from non-English speaking backgrounds.

Are the bins hygienic to use?

Yes. The bins have a metal hopper handle that you pull down to put your items in to enforce maximum hygiene. They are also regularly cleaned by Council staff.

Why are the bins bright red and yellow?

The solar bins are bright red and yellow to alert locals and visitors to their location and to clearly identify the waste bin from the recycling bin. Red is for waste like chip packets, food waste and plastic bags. Yellow is for aluminium, glass and rigid plastic recycling. The bin colours are also in line with the EPA waste and recycling bin colour scheme so that it also matches what locals have at home.