I joined Living Connections as I saw it as initiative which would help me give back to nature. I hope providing suitable native plants to grow in my backyard will bring back the larger reptiles, smaller birds and native animals, by giving them a chance to re-establish themselves in our district.

I live in a semi-detached house on Tamarama Street, so the weather conditions can get gnarly, and my block is long and narrow. Plants that have evolved in these coastal conditions along with ground cover vegetation are important and the best choice for where we live.

I’m so happy with my newly planted shrubs, trees and Dianellas. The two Leptospernum laevigatum (Coastal tea tree) are hemmed in between a new three-storey house behind the fence and our back shed. The idea is to create a privacy screen from the new development behind our garden. I was worried whether the light levels and cramped conditions would hinder the tea tree establishing, but I needn’t have fretted as they are growing well and looking healthy.

I’ve planted The Willow-leafed Hakea (Hakea scalicifolia) in pride of place by a small stand of banana palms. It has quadrupled in size since planting in 4 months ago, what with the good growing conditions in a La Nina season. I’m again counting on it to grow to 5 meters to help obscure the view from the windows of the new development.

The Acacia sophorae has also tripled in size and is planted near the Hakea and banana palms and I can see the bananas eventually will have to go!

I have Dianella planted in four spots and all of them are powering ahead, it is easier for the low plants in these coastal conditions. Although the Westringia fruticose (Coastal Rosemary) doesn’t care about harsh conditions in the least.

I have left my favourite plant to the end. The Correa reflexa (Native fuchsia) has beautifully shaped leaves and long tubular bell-shaped flowers. It has a great personality – if a plant can be described as having one – and it is doing well in quite a shady spot. The flowers are attractive to small nectar eating birds and nectar loving insects and I’m hoping it’s the one that attracts the small birds into my patch, either for the nectar or the insects!

Check out our Living Connections page for all the details and how to get involved. 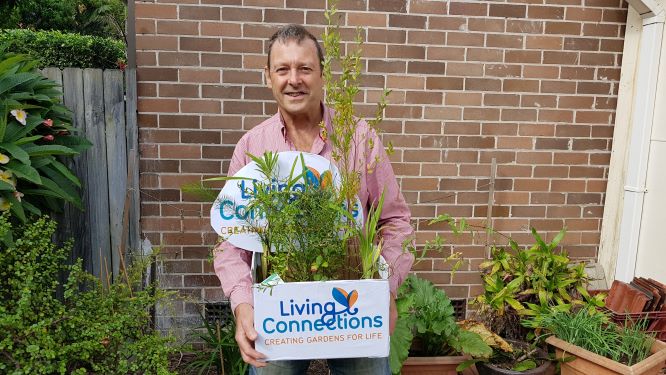 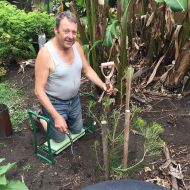 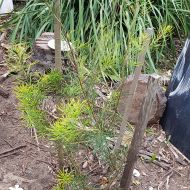 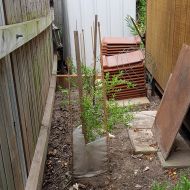