In 2019 Bondi Public School received $5,000 to help them install water saving wicking garden beds for their flourishing Stephanie Alexandria Kitchen Garden. The project saw them replace their old garden beds, which are used to grow vegetables, and replace them with 35 wicking beds.

Wicking beds are a self-watering system where water is stored under the bed and drawn up by a wicking process as the soil above dries out. The original beds were watered by an irrigation system four times a week which used an enormous amount of water, roughly 55984 litres every six months. The new beds aim to reduce the amount of water needed and only need to be filled up every few months. Over a six-month period a total of 12128 litres of water has been used which is a 70% reduction in water saving. The wicking beds also have the ability to hold rainwater so less is wasted naturally.

In addition to the water saving benefits of the new system, the beds create mini ecosystems allowing a complex soil biology rich in nutrients to build up which means less fertilizer is needed. Students from kindergarten through to Year 6 are all involved with the Garden's transformation, along with teachers, parents and chickens! 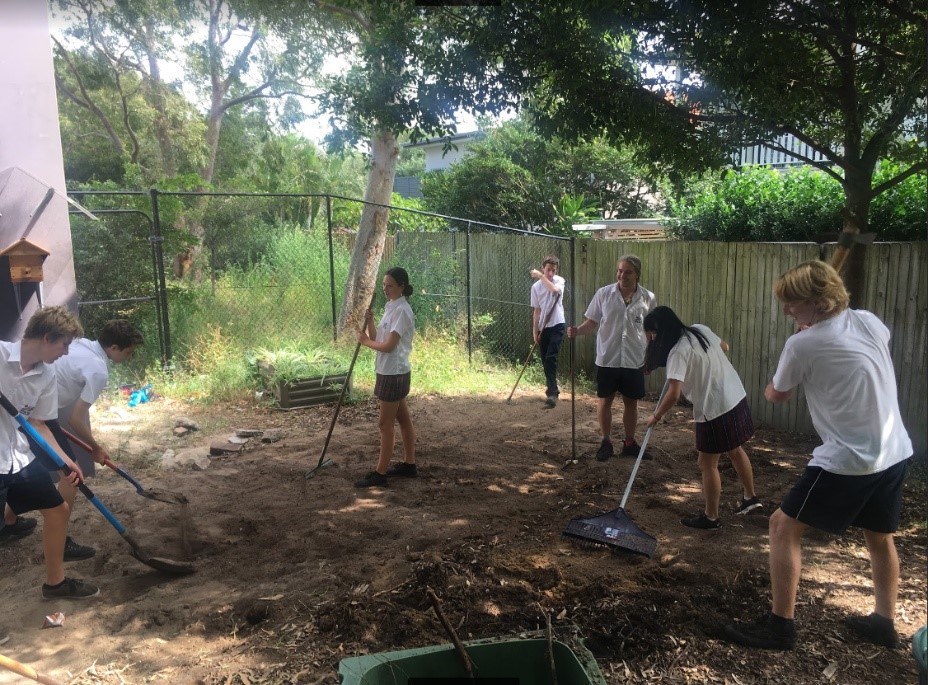 In 2018, Rose Bay Secondary College received $2,500 in funding to create a native garden to support their recently installed native bee hive. The garden features a frog pond and more than 30 species of indigenous plants which will provide Food Technology students with an abundance of sustainable, locally-grown food in the years to come.

Students were involved in all elements of the initiative, from choosing the location of the garden through to selecting suitable plants, weeding designing, digging out the frog pond and ongoing care of the garden.

Aside from creating a suitable environment to support the school's bee hive, the garden has also been used by students learning about ecology. In future, it will also become an ideal learning space for students studying Geography, Design and Technology, Food Technology or those learning about compost initiatives.

Pop up gallery - The Loco Project

The Loco Project hold pop-up exhibitions in shipping container galleries showcasing local talent. With the $3000 grant awarded they held a 4 week pop-up art exhibition on Bondi Beach, 21 March – 17 April 2016, showcasing 8 local and 4 international artists. Each week a new range of photography, paintings, illustrations, timber art and locally made crafts were displayed and project staff and the artists themselves volunteered their time to staff the gallery.

Throughout the exhibition thousands of visitors to Bondi Beach were introduced to Waverley’s vibrant local creative sector, with an average of 60 people per day visiting the gallery weekdays, and 100 per day over weekends. Many more viewed the exhibited works from outside the intriguing, brightly lit, red box.

“A lot of people were fascinated by the whole concept of this container being a pop up gallery and enjoyed the seating and music. Thanks, it was such a fantastic week in Bondi…It was a great success!”

Tactile Tours - Sculptures by the Sea

Tactile Tours aim to provide access to the annual Sculpture by the Sea (SxS) exhibition for children and adults with a range of disabilities. The Program is supported by Council’s Small Grants Program, the Art Gallery of NSW, Catalyst development funding, and the Janes N Kirby Foundation.

Participation in Tactile Tours started with 9 people in 2009 and by 2016, 405 people with a disability, and 132 carers participated, including school students, and adults with a wide range of disabilities. Council’s ongoing support has enabled the testing of new program components. In 2016, in collaboration with WCLP and Catholic Care, participants were offered the opportunity to present their favourite sculpture to an audience in a ‘My Perspective’ Tour. The Public Program of weekend Artist’s Talks was also Auslan interpreted and promoted to visitors who are deaf.

In 2016, SxS also provided a transition to Work Program for disabled young people which involved pre-exhibition work experience at the SxS office, and volunteer opportunities during the exhibition.

Sydney Jewish Festival Inc. received a grant of $3,000 inMay 2016 to support Shir Madness, an established music festival showcasing and celebrating the diversity of Jewish music and Jewish performers from Sydney, interstate, and overseas. Held at Bondi Pavilion on Sunday 18 September, the festival presented 35 performances across four stages in a 10 hour musical feast.

More than 17% of Waverley’s population identifies as Jewish, and the festival had strong local involvement. Many of the 30 volunteers who worked to put the program together over a period of 9 months were Waverley locals. About 1,000 people attended, from Waverley and further afield, transforming the Bondi Pavilion into a festival of light and music.