Waverley local heroes of the year 2015 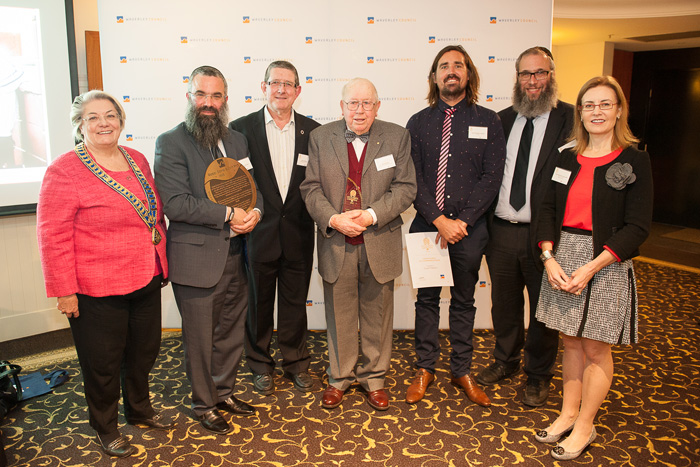 Since 2005, Waverley Council has recognised and rewarded its community leaders. In 2011, Council decided to award a ‘Best of the Best’ award every four years with a bronze plaque installed within the beach promenade, known as the ‘Recognising Our Community Leaders’ Walk’.

This year Rabbi Dr Dovid Slavin, from Our Big Kitchen and The Yeshiva College will join 12 Local Heroes on the walk as Waverley's Local Hero ‘Best of the Best’ Bronze Plaque Award (2011─15) winner. Rabbi Dr Slavin's other volunteer roles include being Chaplain/Rabbi of the NSW Ambulance Service and co-founder of Gift of Life Australia, a register of prospective bone-marrow donors.

This year the Mayor presented a special Waverley Lifetime Achievement Award to John Wright OAM. John has been volunteering to help others and shape our community for over 60 years and, at the age of 92, he is still going strong. A founding member of Waverley Men's Shed, he is active on several local and Council run committees. John is also an active member of St Mary’s Waverley, and for over 40 years he's helped to preserve the historic church and gardens for the benefit of the community.

Mayoral Certificates of Commendation were also presented to: